How do you feel about going naked? 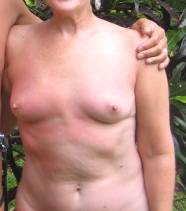 Frankly, just the thought of going naked when I was younger (and vastly more physically attractive) would have been enough to get me to break into a fearful sweat! And we all know how bad fear is for the body!  I would sooner have been caught dead. In those days I even changed in the dark! Heaven forbid hubby saw me and I sure didn't want to see myself.

And as for going to a clothing optional resort - FORGET IT! With my body image issues (another downer for our immunology) , heck no!

But, you know how it sometimes happens that The Universe steps in and something totally unexpected takes one of your major 'truths' that lands up taking your neat little world and turning it upside down?

By 1991 I’d been waging war on my body for decades. But no matter what 'best weight loss methods'  I tried to slim down - the truth was, that in all that time I'd moved not one little bit closer to loving myself or feeling comfortable in my skin.  But ironically, when I look back to my body at that time, I actually had a pretty awesome body.  Pity I didn't know that back then because now that I understand my body better, I also know that my cells probably did a lot of aging in that time when I was so hateful of myself.

Little did I know that going to a clothing option resort in the summer of '91 would change so much for me... in a good way. It would do wonders for my low self confidence.

I was conned into going naked

Hubby and I were on a two-year round the world trip, we'd bought an old camper and were traveling around America. It was 4th of July, and all we wanted was a quiet place to let the madness on the roads subside. Little did I know that this earth-tilting event would leave me and my body image issues radically changed.

A 'friend' had conned into going to a clothing optional resort. The 'Red,White and Blue' on the Californian coast was a place where .....YIKES....social nudism is practiced - yes you know one of those places where everyone is going naked!!!?

With my body image issues going naked was excruciating until something unexpected happened....

I begged and pleaded to leave but it was my fault we were there and hubby wasn't budging. He had no qualms going naked and whether I liked it or not- we were there to stay for 4 days! Eeeech!

Here was my dilemma - I'd been brought up in a staunch Catholic environment so I just 'knew' that all nudists had to be sex perverts andsocial nudity had to be sinful. I was incredibly fearful. All I could think of was that I wasn't leaving the camper for four days.

But damn, peeking out from behind the curtains, I couldn’t see anything about social nudism that looked anything other than a lot of pretty normal looking people having fun. Um... everyone except me, that is!

Hubby was having drinks with the neighbors and their little boy kept coming over to remind me his family were waiting for me to join them for a drink.

A drink? I thought it would probably take more like ten double gins for me to appear in my 'birthday suit'! Anyway to cut a really long story short, wishing my Creator had thought to give me way bigger hands, I eventually ventured out wishing I was anywhere else but here.

And oh dear - it was far worse than anything I could image. I mean, how do you talk to someone's eyes when all you can see are dangling appendages? How can you vaguely relax when you feel so self-conscious going naked that you feel like jumping out of your own skin?

But then what I think of as a miracle happened. Appendages seemed to fade into the background and I started noticing bodies - their shapes and sizes. Then the second miracle happened....something that would lead to an important discovery.... To read that story click here!