If new ideas about obesity and health interest you read on for more on diabetes, heart attacks and stress.

Here's what we apparently know for sure: when it comes to obesity and health - we apparently KNOW that obesity is to blame for just about every illness like heart attacks, diabetes, death etc... etc... we know all that for sure - right? And we also know without any doubt that the cure is to lose weight - right?

But what if there is a growing body of research that is raising some serious questions about that.  For instance obesity rates in the USA have sky-rocketed and yet longevity has increased.  And that's a pattern you're seeing in Japan and many other Western countries as well. And if the graph on obesity doesn't make you scratch your head - it should.  How did it happen that in 1998, overnight 29 million Americans went from so-called normal weight to overweight?

The other thing we KNOW for absolutely sure, apparently is that the cure for our obesity and health problems is to lose weight- right? Well some health indicators DO improve with weight loss. But hark there's something startling that happens when we regain even a small proportion of this weight back.

Although people's healthy indicators all improve when they lose weight - the really interesting thing is that in some cases, they only have to regain a quarter of the weight they lost for their health indicators to return to what they were before they lost any weight. Curious - right?

Now I know I'm treading on hallowed ground (it's not the first and it won't be the last time) here but so long as we 'know' that obesity is THE health ogre, we'll continue to ignore other things that might lead us to a slightly different conclusion, and may lead us to different treatment plans for our health. And besides I love a good debate!

So, as I said, if you're open-minded about obesity and health, read further... if you aren't, well you'll probably be wasting your time. And hark...before I'm sliced, diced and popped into a blender, I'm not saying our body likes being morbidly obese (which is only about 5-6% of the US population) - but then it also doesn't like being emaciated. 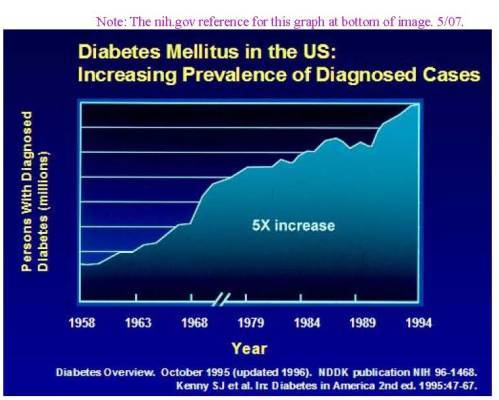 So let's look at the whole obesity and health debate when it comes to diabetes. The reason we're seeing soaring rates of type 2 diabetes not just in adults but in children too is supposedly because of obesity. We hear that everywhere, we read it everywhere - so we 'know' it must be true. But are there other things that could be causing the health problems associated with diabetes much more than the actual fat itself?

Well it seems there are many things that cause diabetes, not just obesity. I mean, I even came across some research from the University of Bristol that links having short legs relative to the rest of you body with being diabetic (who would ever have thought (!)). The authors felt it had something to do with women not getting enough to eat during the first three months of their pregnancy giving birth to babies with short legs.

And I've also seen research that claims that a lack of sleep changes how our body processes sugar AND is the 'royal route to obesity.' So could it be that the fact that we're sleeping about 2 hours less a night now than we did a decade ago be causing more health problems than obesity itself?

Let's think about how diabetes develops - it has to do with the way our body processes sugar. Well, here's the thing to take into account: in the Western world we're consuming a lot more sugar than we used to....look at all the (calorie and sugar-laden) soda (about 10 teaspoons of sugar per 12 oz) that's consumed - what impact does that have on the rate of diabetes?

Apparently in the 1600's sugar intake per person was about 7lbs per year in the United Kingdom. By 1850 in the USA it was about 52 lbs per year and by 2003 USA today reported it's about 150 pound per person per year. And no just that but the composition of sugar has changed with a bit of processing too.  PS... So interesting don't you think that Coco-Cola has been paying off scientists to shift the blame for obesity away from sugary diets.

And how does our consumption of sugar impact on our our obesity and health? Well studies show that after eating sugar our white blood cell (our first line of defense against viruses or bacteria) count is suppressed which compromises our immune system. Now, is it becoming fat from eating too much sugar or the high levels of sugar themselves that cause the health problems?

And what about Stress - how does that impact on how our body processes sugar?  After all, these is no doubt that living in a larger body is stressful because of all the stigma involved, but also just all the food obsession and the stress of hating ourselves. 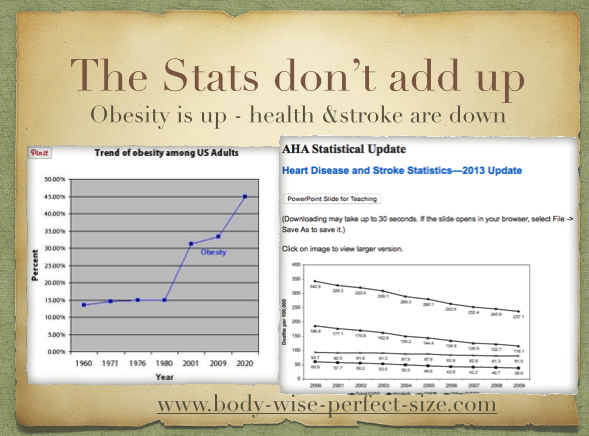 So in the obesity and health arena, experts say that heart attacks and strokes are caused by being overweight. Really?  Well the statistics don't show that at all.  In fact heart disease and stroke have remained flat -and if anything ﻿even declined slightly﻿ according to the American Heart Association- as weight has risen.

This isn't true either according to a 2016 report in the JAMA (Journal of the American Medical Association) which concludes:  In their conclusion researchers comment: "we documented a substantial decline in the prevalence of key CVD risk factors over the last 3 to 4 decades, affecting obese, overweight, and lean segments of the population. Among obese persons today, prevalence of high cholesterol, high blood pressure, and smoking are now 21, 18, and 12 percentage points lower, respectively, than among obese persons 30 to 40 years ago. The corresponding reductions among lean persons have been somewhat less, with average declines of 12 to 14 percentage points."  The only exception to this improvement was diabetes.

This same research article points out that there has been a sharp increase in overweight and obesity in the United States over the past 2 decades.  In fact the prevalence of obesity among adults aged 20 to 74 years has from 13% to 31% in both men and women, across all racial/ethnic and in all age groups. This is naturally accompanied by dire health warnings and recommendations to lose weight which the diet industry loves.  Please note...this is not an insignificant finding when one considers that this study analyzed 5 cross-sectional, nationally representative surveys: National Health Examination Survey (1960-1962); National Health and Nutrition Examination Survey (NHANES) I (1971-1975), II (1976-1980), and III (1988-1994); and NHANES 1999-2000. 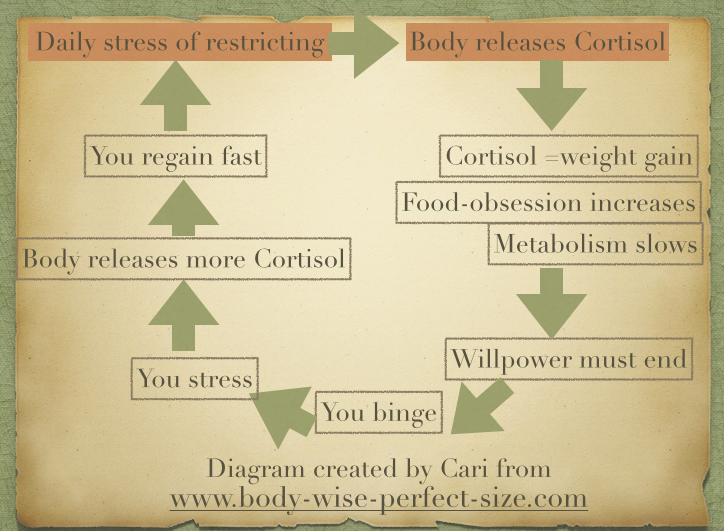 I found it interesting, though that although it's seldom really spoken about, that group of Chinese immigrant men who felt stigmatized in our society who had a vastly higher heart attack rate?

And here's something powerful to think about when it comes to the power of our perception and our belief to change our biology: Women in the Framingham Heart Study who believed they were prone to heart disease were four times more likely to die. This was not because these women had poorer diets, higher blood pressure, higher cholesterol, or worse family histories of heart disease than the women who didn’t get heart disease. The only difference between the two groups was their beliefs. Well how stressful is it to believe that you're only one mouthful away from a heart attack?   This tells me something important.... heart attacks had less to do with the actual amount of fat these carried than the nocebo affect (the belief that they would have a heart attack).

We know that stress upsets all our hormonal levels - many like leptin (the hormone that tells you when you've had enough) , ghrelin (the hormone that that tells you you're hungry) and cortisol (a weight-gaining hormone) that have to do with appetite regulation and weight gain. To live in an overweight body in the Western world is to live in a chronically stressed situation. Whether we're worrying about clothes, health, what people are saying....could it be that the stress about being fat and the neuropeptides that produces are more dangerous than the fat itself?

Worldwide Western countries have seen rising weight rates. This co-incides with a number of things like:

More diet products, especially those that encourage fast weight loss. Look at their advertising, the vast majority is geared towards the 'our diets is better than yours because it's faster' approach. We may consider that it's yo-yo'ing weights that are dangerous. Indeed researchers found that a higher degree of weight cycling, (defined as  the frequency of intentionally losing > 10 pounds), was associated with an appetite-stimulating hormonal profile, including higher concentrations of ghrelin.

And remember that all these diet pills have side effects (even though I'll admit that its difficult to remember this as they are mentioned to happy music with happy and active images and often said speeded up as if they are nothing to be concerned about).  Thats why so many of them get banned. And besides there is an ever growing group of research showing that the biggest cause of death is conventional medicine!

Just look at how many supposedly FDA approved products -like Ephedra, for example - have been pulled from the shelves. And yet initially they were approved because their trials showed they helped x, y or z.... and then we discovered that.. oh by they way... they also cause a,b and c which landed up being far more detrimental to your health than the original condition it was meant to alleviate.

More low fat, no fat, low sugar, no sugar foods, foods. Well low fat and no fat options are normally pumped with sugar to improve the taste and low and no-sugar items are enhanced with fat for the same reason. And how, I wonder, does our body process all these artificial things we do to food.

And who consumes the most of these 'diet foods'? Why... desperate dieters of course! So could it be that along with dieting ourselves fatter, there's something about diet foods themselves (not to mention how many of our foods are simply loaded with chemicals like pesticides, colorants and so on) that impact on our health much more so than fat itself?

Well... these are just some of the questions I'm asking myself about obesity and health when it comes to 'what we apparently KNOW for sure that might not just be so!' You don't have to agree with me - but I do at least want to open up a few more possibilities!

But I'm also asking them because there is growing body of obesity research that paints a slightly different picture about obesity as well.