Sleep and obesity, you wouldn't necessarily expect their to be a link - would you?  But there is....and it's an important one! 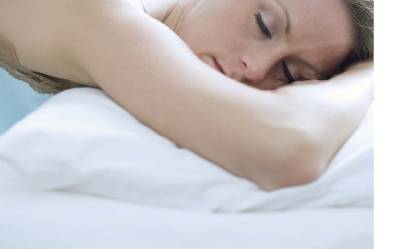 In March 2008, I was fascinated by a segment of the TV show 60 minutes. Strangely enough, it’s the same sleep and obesity research I quote in the Mind over Fatter program but this time it held a new significance for me.

I’d recently gone through a 4-month period where I'd slept less than 4 hours a night. I'd gained weight yet my eating and exercising patterns hadn't changed. It's the same pattern I noticed at menopause.

In my dieting days any sort of weight gain, would definitely have sent me into a panic and back to unhealthy dieting. Now, that I'm an intuitive eater and now that I know that the size of my body doesn't materially affect my longevity, I watch with patience to see what my body is up to and what it could be telling me. I just hadn't joined the dots until I saw 0 minutes that my body was telling me it needs sleep.

Another time when I'd really struggled with sleeping I'd used the fabulous reflex-o-board which is an all natural sleeping aid, and it did the trick. No sleeping pills, just using the power of your own body to heal itself.

You can sign up for our complimentary sleep tips here.

There is plenty of fascinating research about obesity that should have us asking questions about how our BMI rates have got it so wrong.  PS... this Prof Linda Bacon interview tells us how this happened!

A 2012 study in the Journal of Nursing Administration found higher obesity levels among nurses who work long hours. Among the remedies suggested: an organizational climate that supports napping in the workplace.

According to sleep researchers, before 1960 the American average for a night’s sleep was 8 hours a night. Now that has reduced to 6.7 hours per night – a significant decrease of 15%.

Yet we live in a society where sleeping less is almost worn as a badge of honour – as if needing less sleep is something of an achievement to brag about.

And, according to this 60 minutes expose, it’s not only that our body needs this time for rest and maintenance, what sleep endocrinologists are now realizing is that the amount of sleep we have has a drastic impact on how our body works in ways that scientists had not previously contemplated.

Sleep and obesity it seems are intricately tied together!

When 32 students kept diaries of how much sleep they had and which foods they ate over a three week period, what researchers at Hendrix College in Conway (Arkansas) found was fascinating:

Week 1: students stuck to their normal eating and sleeping schedules.

Week 2: They were asked to sleep an extra two hours a day.

Week 3: They went back to their normal routines.

Here's what they found:  Students who got an extra 2 hours of sleep ate nearly 300 calories a day less than in week one. Then, when they returned to their original sleep deprived routines in week three, they again ate more food.

The National Sleep foundations 2003 Sleep in America poll shows that:

And how then do sleep and obesity fit together? Well get this...

According to the National Sleep Foundation, a 1999 study done at the University of Chicago found that building up a sleep debt over a matter of days impairs metabolism and disrupts ﻿hormone levels.﻿

After restricting 11 healthy young adults to four hours' sleep for six nights, researchers found their ability to process glucose (sugar) in the blood had declined—in some cases to the level of diabetics.

Wow - did any health professional ever mention that to you? I've only ever heard that my diet, weight and genes play a role in whether I develop diabetes.  And note, this doesn't say that weight changes the body's ability to process glucose....it says that a lack of sleep does that.

A follow-up study tested healthy men and women with an average body mass index; half were normal sleepers, the other half averaged 6 1/2 hours or less. Glucose tolerance tests showed that the short sleepers were experiencing hormonal changes that could affect their future body weight and impair their long-term health.

To keep their blood sugar levels normal, the short sleepers needed to make 30% more insulin than the normal sleepers … which predisposed them to physiologic abnormalities that may increase appetite and calorie intake.

Now to get to the crux of what researchers found relative to lack of sleep and obesity.

After students were deprived of sleep – they were:

• hungrier,
• had increased measures of fat especially belly fat
• were less alert and …
• their bodies were no longer able to metabolise sugar (which puts them at an increased risk for type 11 diabetes).

Dr. Eve Van Cauter who has done extensive research on sleep and obesity, is quoted on the website for the National Sleep association that sleep deprivation is “the royal route to obesity,” due to hormones.

The level of leptin (a protein manufactured by your body’s fat cells) falls in subjects who are sleep deprived. The higher the concentration of leptin in your blood, the more body fat you have. Researchers aren’t exactly sure what leptin does but suspect it may either help producing feelings of fullness and satiety after eating or it may stimulate appetite.

Other research done at the University of Chicago found that volunteers who were deprived of sleep not only had lower levels of leptin, but also higher levels of ghrelin which is a hormone that triggers hunger.

psychological manifestations of fatigue, sleep and hunger are similar, it’s very easy for us to confuse them. Thus, it’s not uncommon to eat (thinking we need energy) when we’re actually fatigued.

This segment of 60 minutes reiterated that there is a link between shortened sleep times, obesity, heart disease, blood pressure and stroke. Unsurprisingly, our biology reads a lack of quality sleep as stress and stress produces stress hormones which affect how our body operates.

Maybe instead of just focusing on diet and exercise as a way to having the body we want we should be looking at a slightly different equation: