Dan Buettner is the man who coined the phrase ‘Blue Zones to describe five geographical areas where a high percentage of people who live beyond the age of 100 reside. Demographers went back 100 years to check birth records for whole populations and then followed them keeping meticulous track of the people who have died, left or moved into an area in order to discover the five  Blue Zones: 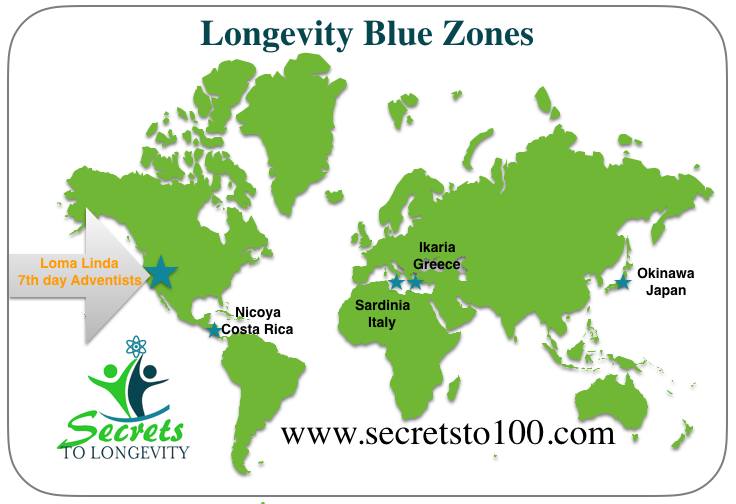 The blue zone of Loma Linda

Loma Linda in California stands out as being the only place in the USA that qualifies as a blue zone which is interesting when you consider that the USA spends more money per person than anywhere else in the world on health care services.  You'd expect that if health care systems made the difference that more places in America would qualify. Which makes it interesting to take a deeper dive into Loma Linda and the Adventist faith in general.

When other geographical pockets of Adventists were studied (even though these Adventists are not ones who live to beyond 100), in both the Netherlands (a study done between 1968 and 1977 of 4000 Adventists) and Norway (the 1960 national census in Norway showed a population of 7,173 known Adventists),  there were significantly better outcomes for Adventists than the general populations for cardiovascular disease, cancer, stroke and general mortality.

Adventists do start with some advantages - they have a strong faith (known to be a longevity measure) and they have a Biblical believe that their body is a temple to be honored and cared for.  Adventists are discouraged from eating pork, drinking caffeinated drinks, smoking and drinking.

Cell biologist, Dr. Bruce Lipton, once said,  a professor of his told him when he first started cultivating cell cultures in the lab, that if he found a problem with cells he was working with, he was to look not at the cell, but rather at the environment that the cell was immersed in in order to discover the problem.  As people, we are a community of cells (formed into a body) within an environment.  In other words, what is there about the environment to be found in blue zones that is health and longevity enhancing.  It must mean that their overall environment is supportive of longevity?

Ever since the human genome was mapped (completed in 2003), the notion that we are victim to our genes has been dispelled and replaced with the knowledge that genetics are only responsible for about 20-25% of a person’s chance of living long and strong.   Buettner says the things that are found in “Blue Zones”  are a healthy environment, like good air and food quality, access to health care, a walkable environment and a lack of infectious diseases.   Loma Linda as a town has banned smoking, supposedly has very few fast food restaurants (although when I googled to see how many there were, there did seem to be plenty) or alcohol outlets and it’s Adventist population do tend to be highly educated (ongoing learning keeps our brains youthful) and they have a high rate of volunteerism (another known longevity measure)

In observing the lifestyles of people living in the blue zones, Dan Beuttner says they take any occasion to walk, be it to do their shopping or visit a friend.  It’s not as if they go to health clubs and work out, they just live active lives, doing small things like making bread by hand themselves rather than jumping in a car to drive to a grocery store to buy it, or doing their own DIY like putting up their own fence rather than hiring a contractor to do it for them.  They move often, they lift, bend, hoe their gardens and so their metabolisms are high, and their bodies remain strong and flexible, as a function of the way they live their lives. They also don’t lived stressed, hurried, pressurized lives.  They live in tight-knit communities and eating is a relaxed affair - and usually done with other people